Hey look at this, a summary of my 2016 year of training and racing, and it's only nearly two months late 😁.

Lets start off with my training.

With no races confirmed on my calendar other than the Berlin marathon in October, and on reflection early last year, I decided I'd start the year working on my aerobic base by bringing back MAF, in a big way, and then dot it with a few very hard sessions in a polarised 80/20 style of training favoured by the elite runners.

This worked well and I got into a good groove building up the miles and promptly forgot about running any other marathons and soon missed the opportunity to enter a spring marathon. My work travel commitments also didn't make it easy to plan a spring marathon.

My wife and I had an early summer holiday this year which worked out quite conveniently from a training perspective. The week after we got back made it exactly 17 weeks until the Berlin Marathon which was one week short of that needed for the 18 week Pfitzinger 70-85 miles per week programme from the Advanced Marathoning book which I'd read and thought would be a great programme, with a few tweaks, for the Berlin marathon.

I followed the programme pretty closely with a few exceptions:

This approach ensured I built up a huge aerobic base whilst also allowing me to continue with the polarised training I'd started doing at the beginning of the year.

As the weeks progressed, this proved to be a great programme and strategy for me. I was getting faster, the runs felt easier and I wasn't struggling with the high mileage at all. This training brought my times right down with me getting close to my 5k and 10k PBs, I set a new 5 mile PB and I also managed to set a half-marathon PB six weeks out from Berlin on an undulating course I really wasn't expecting to dip under 80 minutes on, let alone set a new PB of 79:09.

So how much of my training was at MAF in the end? This much: 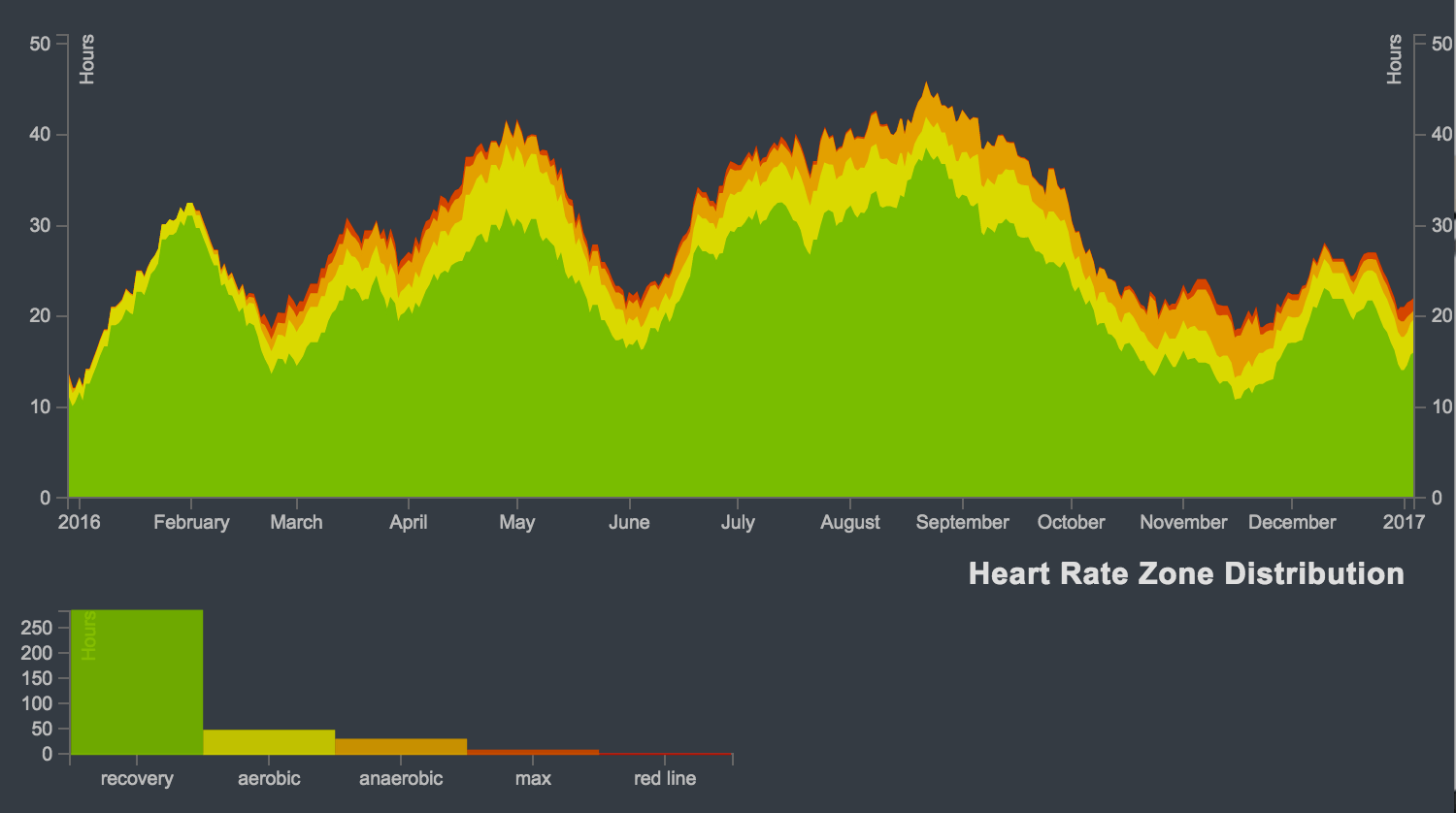 This is from SmashRun. I don't have any control over the ranges they use here but as you can see most of my running was in the recovery and aerobic zones, which is expected with MAF. When you flip the graph into percentage mode - I don't like this view, but it illustrates the point well - you can see I spent closer to 90% of my time in aerobic or recovery heart ranges: 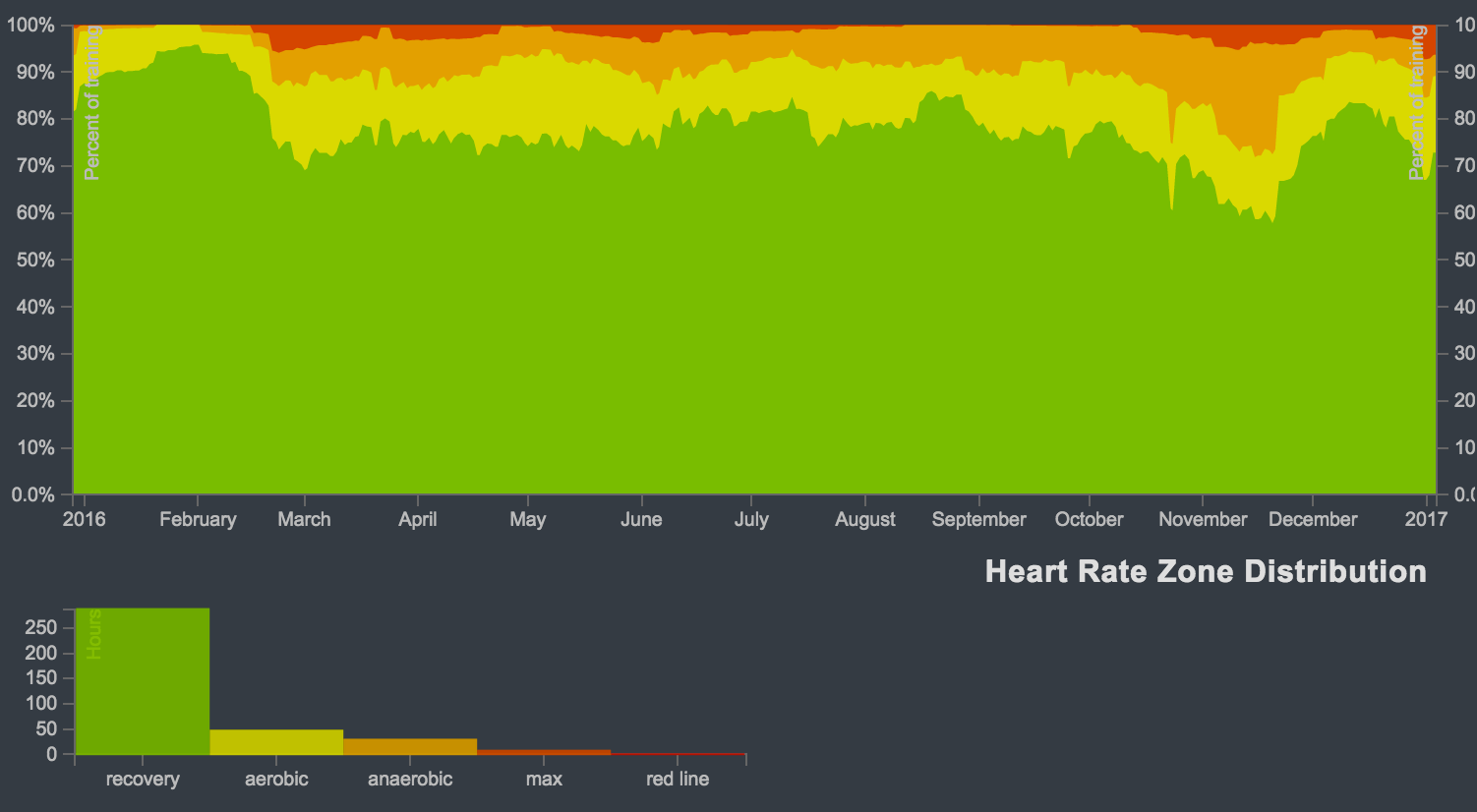 I'm pretty chuffed with this consistency and confirmation that going slower and longer definitely makes me a faster runner, and without injury too. The graph also shows I didn't do too well at sticking to my 80/20 goal so I've got some work to do to increase the amount of hard work in my training in 2017.

2016 was a good year for my racing. These are my best times for the year, compared to my PBs:

I think the biggest disappointment with my racing for the year was my single A race: the Berlin marathon. I put all my eggs in a single basket and I think ended up putting too much on the race and thus too much pressure on myself so didn't perform anywhere near as well as I'd hoped and expected. It was however a good lesson on things to do differently in future and the fact I bounced back a month later and set a new PB by over six minutes at the Chelmsford marathon confirms my training was sound and my mind was probably entirely to blame for my disappointing Berlin marathon.

Unlike previous years, I raced through the winter last year too by taking part in the Winter Trail Run Series taking in the Mapledurham 10 (mile), the Muddy Welly (10k) and The Gut Buster (10 mile) and did incredibly well. I finished seventh, second and first (by consolation as the first place chap was misdirected by the marshals at one point) which, if there were a series prize, would have probably been awarded to me 😁. This was a great series and one I'll be doing in future. The mud in the freezing cold isn't really so bad and running through the winter has definitely helped get 2017 off to a good start.

2016 was another good year for travel thanks to work and I had the pleasure of visiting and running in Austin, Majorca, Singapore, Colorado Springs, Johannesburg, Berlin, San Francisco, Napa, Cincinnati and Amsterdam, and I tried to remember to get a selfie with a major landmark or notable event on a run in each.

In 2017 I plan to take my running to a whole new level. I'll be keeping MAF as a big part of my training and will be ramping up my mileage in a huge way for two reasons: 1. I'm running my first Comrades Marathon on 4 June and 2. they say amazing things happen to your running when you start cracking 100 miles a week, so I may as well give it a go whilst I'm training for Comrades. To prepare me for this, I'm going to do a modified version (see above) of the 18 week Pfitzinger 85+ miles per week programme from the Advanced Marathoning book, though I'll probably need to add in more anaerobic work if I want to get closer to the 80/20 ratio of easy vs hard work.

I have no expectations for Comrades other than to enjoy the experience of this amazing race and finish it, and if I do well, then that's an added bonus.

On my way to Comrades I'll be running a few staples for the first half of my running year: the Wokingham half marathon (done, and set a new PB of 77:31), the Maidenhead 10 (mile), the Fleet half marathon, the Manchester marathon (first time for me) and then the Comrades marathon. I may throw in a few parkruns and 10ks to keep the leg turnover up.

The second half of the year is still up in the air. If I happen to be in San Francisco on the weekend of 23 July, I may do the San Francisco marathon and then I'll wing it for the rest of the year. I'd like to do an autumn marathon, but I'm not sure which one yet.

I'll be keeping with the LCHF lifestyle, attempt to smash all my PBs and I'll probably join the 100 parkrun club too.