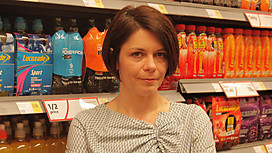 The Truth About Sports Products

As many of us try to get fitter in this Olympic summer, Panorama investigates the sports products that promise to boost your performance. Are those pricey trainers worth the money? Can sports drinks really help you work out for longer? Are protein shakes any more effective at honing the physique than ordinary food?

With exclusive access to the findings from a unique study by the British Medical Journal and Oxford University, reporter Shelley Jofre tests the science behind the bold advertising claims made by some of sport's biggest brands.
— The Truth About Sports Products

A very interesting programme that concentrated on the marketing claims sports supplement, drink and shoe manufacturers make about how wonderful and amazing their products are and how they'll make you so much better at your sport, and the scientific evidence to support these claims.

As you can expect, pretty much everything lacked any relevant scientific backing to go with the sensational claims with some companies using very dubious studies to try and back their claims. Essentially the programme revealed that these companies have come up with very clever ways to make you, the average Joe Schmoe, pay a lot of money for sugar, salt and water and who knows what else without any real good reason. These supplements and drinks have very little impact on the average person's performance and recovery.

They also covered the injury prevention claims made by running shoe manufacturers and, as a barefoot running fan, you'll know they came up with nothing. To try and make a balanced argument, they mentioned barefoot running and even illustrated how running barefoot reduces impact and thus acknowledged Daniel Lieberman's research. But then they turned things a bit against barefoot and minimalist running, as they did with normal running shoes, when they mentioned that Merrell also couldn't provide research proving that running in their minimalist shoes could substantiate their marketing claims. This is a perfectly valid thing to do and good on them for doing it, but it did seem a bit hurried and "matter-of-factly" and seemed to neglect the fact that the barefoot running research is a lot newer and more relevant to Merrell's claims than anything out there for normal shoes.

They did however summarise the running shoe debate by getting a scientist to basically say that until there is further research about the affects of various shoes (or not) on injury prevention, the best thing to do is buy a pair you are comfortable with and ignore all the marketing hype. I couldn't agree more, though I'd prefer it if you went for a pair of minimalist shoes or go completely barefoot 😉 .

A couple of things made me smile in this rather serious programme. First there was the revealing of an old world-class athlete's performance enhancing supplement: Graeme Obree showed us how to make a jam sandwich which he normally consumes with water. This and other proper foods are all the supplementation he ever used and supported by comments on other athletes doing the same today.

The second thing, and this really tickled me, was when the reporter asked Tim Noakes what the point of low calorie sports drinks is given these manufacturers claim you need the sugar and carbs etc to improve your performance. Tim was clearly tickled by this too as they showed a section of filming indicating re-takes had to be taken as Tim couldn't control his laughing.

On the topic of Tim Noakes, I think this programme could have spent a lot more time interviewing Tim on the sports drinks topic. He's a world renowned scientist in this regard and can be credited some very good studies on the topic of over-drinking and even taking on Gatorade and ultimately winning. He's also just released a new book on the topic: Waterlogged: The Serious Problem of Overhydration in Endurance Sports. I've not read this yet, but if it is anything like his coverage of this topic in Challenging Beliefs: Memoirs of a Career, it'll be a very good read.

If you're based in the UK or have access to a UK based proxy server, I recommend you watch this programme on BBC iPlayer. It's a worthy use of an hour of your time and adds to my own growing beliefs, following years of experimenting on myself, that most of these products out there are a complete waste of time and money and they'll only make you fatter and poorer. If you're not in the UK, I'm sure you'll find a "backup" on the internet sometime soon 😉 .