It was around about this time last year that I noticed the Berlin Marathon was close to opening up entry for this year's race and I decided I'd give it a go. Entry is via a ballot system and I had nothing to lose if I wasn't selected as I'd get my money back. So on 21 October 2015 I stumped up my cash and put my name on the list.

A few months later I received notification that I'd been selected and the wheels were put in motion for my first attempt at the world's fastest marathon. With the memory of managing to successfully run a 2:53 marathon at London after blowing up spectacularly, and quiet confidence in my abilities, I set myself the ambitious goal of running 2:45 at Berlin and set to putting everything in place in my training to get me there.

I'll detail my training and build up in another post, but suffice to say 17 weeks and over 1500 kilometres later I found myself in Berlin wondering around the race expo with my goodie bag containing my Championchip, race number and a pile of other gumpf you get at these race expo's, checking out the various exhibitors pushing their massively cushioned shoes, branded clothing, fancy devices and sugary products, oh yes and also watching people attempting to gain a last minute advantage by hanging from a bar to extend their stride length :stuck_out_tongue_winking_eye:. 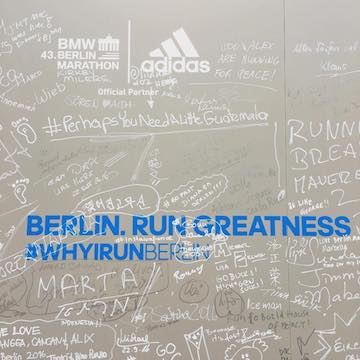 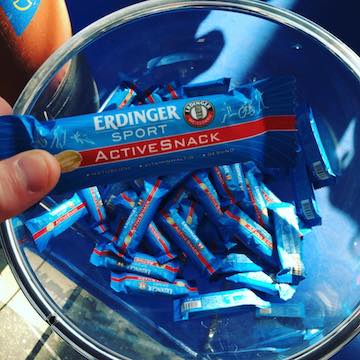 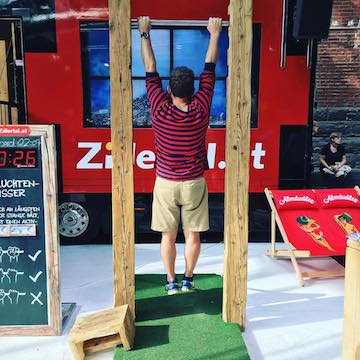 The excitement was building and I was starting to get anxious about the race. I was feeling good and was confident my training had gone well but I still remained pretty anxious.

I ate well, kept the alcohol down and really enjoyed the weekend until lunch time on Saturday when the anxiety really started to get to me. By early evening I was becoming a bit of a nervous wreck (very unusual for me) wishing the race was over and done with. I couldn't sit still or concentrate on anything and as all the TV was in German, I couldn't even watch TV to unwind and clear my mind. I barely slept a wink that night. I'd doze off for a bit and then would wake up panicking about the race or worrying about my training or thinking about my pacing strategy.

And as luck would have it, I finally managed to switch my mind off about 45 minutes before my alarm went off at 6am. I like to get in a bulletproof coffee and have it clear my system before I run so waking up this early is a necessity - I prefer it if I didn't have to use the portaloo for a pre-race #2 😁.

I left the apartment at 7:15 and took a leisurely stroll across Tiergarten to the athletes start area and got there with plenty of time to spare. It took me a little while to locate my allocated baggage pen but once I did, I stripped off and dropped off my bag. All bags had to be dropped off by 8:45 and as this was a huge race I wanted to make sure I'd dropped my bag off before the masses. It was a pleasant morning too so I had no fears of freezing to death before the start.

After dropping off my bag I jogged very easily with the crowds to the entrance to my allocated starting pen. I then milled around there for a bit watching more and more people make their way to the start and watched the commentary on the big screens above the start line. It was here that I was reassured that human beings are disgusting creatures. I can understand the need for a nervous or "to be safe" squeezy wee in the bushes just before the start of a race - we all do it - but I saw several people disappearing into the bushes for a dump!!! Come on people!! This is a public park… you don't do number twos in the bushes, especially when there are plenty portaloos with very short queues!!!

Anyway, I squeezed in another quick warm up run and then made my way to my allocated pen. Thanks to my 2:53 from London, I was allocated to starting pen C, two back from the elites, with great views of the big screens over the start line and good acoustics so I could hear all the commentary too. From here I watched the wheelchair peeps head off, then the recumbent bikes and then it was our turn, but not before the guy two behind me decided he'd have his squeezy wee right there in the starting pen!!

As is usual with these big races, there was a fair bit of pushing and shoving as people made their way across the start line and onto the run though running wasn't really possible for several hundred metres. Things soon started to spread out a bit and I got into my stride and was soon ticking over the kilometres pretty much on target pace. I felt really good and concentrated hard on holding back and keeping to pace; I didn't want my London marathon excitement to repeat itself. This worked well and I was really enjoying the race, taking in the sights, enjoying the crowds and generally having a good time. I passed half-way just a little behind schedule, but nothing too concerning as I could easily make it up in the second half, or so I thought. 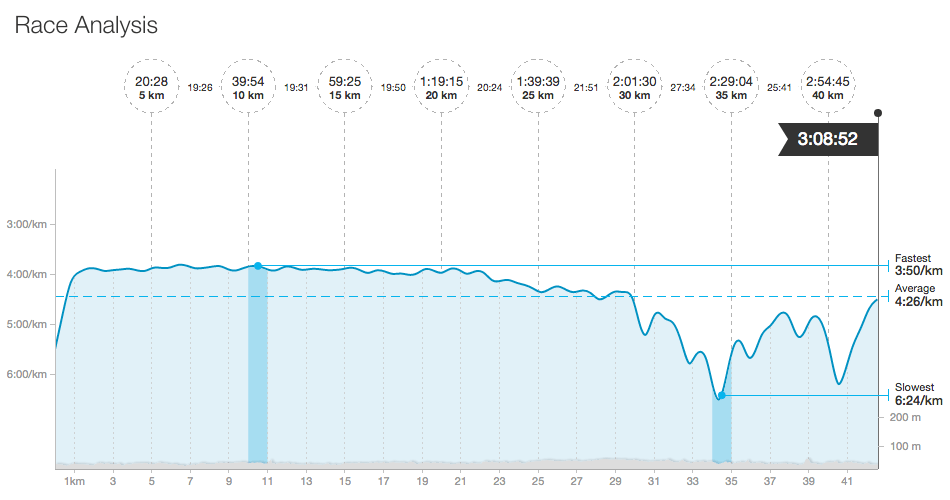 It wasn't long after half-way that I felt a twitch in my right sacroiliac joint. I didn't think too much about it as I've felt this before and it usually shifts after a few higher-than-usual knee lifts. Not this time. The twitch hung around for a little longer and soon became a cramp in my lower right quad just above the knee. This caused me to start slowing down and soon I was experiencing light cramps in my left lower quad too which caused me to slow down even more.

Things really took a turn for the worse around 30km when my right quad and calf both cramped up and quite painfully too forcing me into my first walk of the race. I then found myself in a run-cramp-walk cycle with my right shin and arch joining in the cramp party too. Things got particularly bad just after 34km where even walking resulted in spasms down my entire right leg. It was around this point that I took on some electrolytes and this seemed to ease some of the tension and I was able to get back into a run-walk routine with the occasional pause for cramping with another major cramp session kicking in just before 41km - not the best place for one's ego to start walking 😉.

With a lot of willpower and hobbling I managed to make it through the Brandenburg Gate and down to the finish line in a disappointing, for me, 3:08:52 gun time (3:08:04 chip time).

I then very painfully and slowly fought the cramping and hobbled my way through the finishing area, took on some fluids, attempted to drink an alcohol-free Erdinger (it was revolting), had a nibble on a chunk of apple (it was floury so too was revolting), retrieved my bag and made my way to the family meeting area where I dumped my stuff, lay down on my back and proceeded to experience the most painful and scary cramping session of my life. As I lay there I could feel the fibres in my legs uncontrollably firing and twitching and then my right calf turned into a rock hard writhing chunk of flesh which looked like it contained a creature within it trying to tear its way out through my skin. My quads were twitching uncontrollably too with my right arch threatening to cramp at any moment too and my left hamstring threatening to cramp every time I moved in an attempt to alleviate the cramping in my right calf. Thankfully my wife had found me by then so was on hand when the cramping became too much and I got demanding. Once the cramping eased off a bit she dashed off to go find some salt for me to take to help with the cramping whilst I lay there sucking the salt off each of the mini pretzels in the finisher's goodie bag 🙂.

It took the best part of two hours for me to recover to the point where making our way back to our apartment was something worth considering and actually possible. In the end I ended up being able to walk, with a few breaks, all the way back to the apartment, via the middle of Berlin for an ice-cream; I really fancied a good proper ice-cream.

I'm not really sure why I started cramping. Some thoughts lead to an electrolyte imbalance or depletion or insufficient training but a big part of me thinks this may have been entirely psychological. The little twitch in my hip accompanied by being tired and the pressure I put on myself to perform probably led to the downward spiral with my tired mind not being in the right place to catch and prevent it from happening. The fact my entire body didn't cramp and that salt in my mouth helped with the cramping after the event further supports this was likely something psychological.

I think skipping a spring marathon was a bad idea too. I think I put too much pressure on myself by only racing one marathon and aiming for a huge PB in it. I'd effectively spent all summer dreaming of breaking 2:45 and stewing over the pressure to train and race the shorter distances to get myself to point.

The race itself was a fantastic race and I really loved the atmosphere, route and crowds. I just wish I wasn't hurting so much that I couldn't enjoy it as much as I'd like to have. I'd also have loved to get that sub-2:45 I'd dreamed of, but it wasn't to be.

I'll definitely be back to give Berlin another go in future.

On a lighter note, you have to checkout this cool interactive infographic from the race. It's all in German but that shouldn't stop you from playing with things. Here's a screenshot I took of where I stood (probably quite literally 😆) and where the average finisher was when Kenenisa Bekele crosses the finish line. 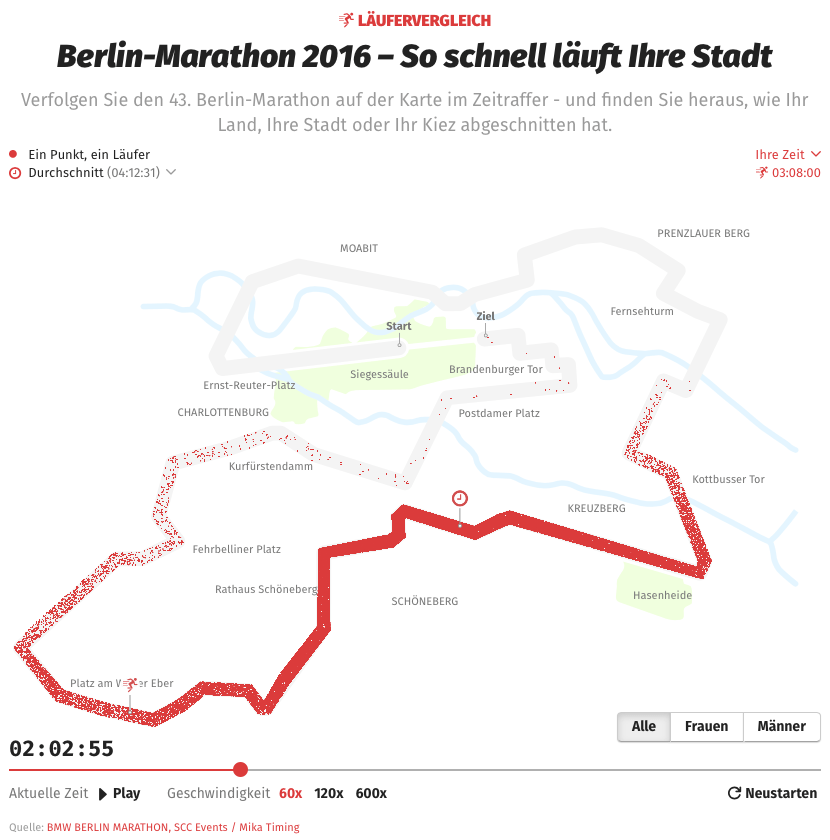 I'm the red man in the bottom left, the average finisher is the red clock.

The route video on that page is pretty impressive too. They played this a few times on the screens at the start with a really great soundtrack over it.