On Sunday 10 March I took part in my first offroad duathlon, the Grizedale duathlon in the Grizedale Forest in the Lake District, and what an event it was.

Going to The Lakes just before Easter has become a bit of a habit for my wife and me. It's normally a nice time to go as things are starting to get warmer, the signs of spring are starting to appear, all the sheep are starting to lamb and best of all, it's before the school holidays so it's cheaper and quieter. One of the things we always do is go for a walk round Grizedale forest. There are loads of different paths and routes of varying technicality so there's always a walk or two to keep us entertained for a few hours. The last few times we've been we've noticed the remnants of the duathlon that would have taken place on the Sunday we arrived and each time I say that it would be nice to take part. So this year that's precisely what we did. We made sure we went up at the same time as the duathlon, which also happened to coincide with the Hawkshead Brewery spring beer festival, and I entered the duathlon.

We arrived in Ambleside Saturday afternoon to some rather chilly weather and the beautiful sight of snow on the peaks. The forecast for the next day wasn't looking too rosy either with more snow overnight and wind and sleet on the cards.

And that is exactly what we got... more snow and the wind blowing in over those snow covered peaks. As you can guess it was freezing on Sunday morning, but thankfully not raining. Despite the cold, my wife, her parents and I wrapped up, strapped my bike to the car and headed over to Grizedale forest.

Once there, I unracked my bike and we walked up to the visitor centre to register and get ready for the race. Following the compulsory pre-race briefing and a gentle warmup run, we were sent on our way for the first run, and what a run it was... almost straight up and then pretty much straight back down...

The peak of the run is Carron Crag, the second highest point in Grizedale at a breath-taking height of 314 metres (1,030 ft) above sea-level. Now getting up the hill the first time round was quite tough but enjoyable. I took things relatively easy and enjoyed the run up and was quite pleased with the fact my Vibram Five Finger Spyridons seemed to be doing a brilliant job, however the same can't be said for the decent. The decent was much steeper than the ascent and very very rocky. This is where the Vibrams weren't really the best things to be wearing. Whilst I had to carefully place my feet, my fellow competitors wearing boots (by comparison) didn't seem to pay too much attention to where they planted their feet and went tearing down the hill.

Anyway, my first run went well and I completed it in 34:33 and spent 48 seconds in the transition area before heading off on the bike. Straight away I knew this was going to be a tough ride. The first 800m were on a wide gravel road, most of which we'd just covered on the run, but then we took a sharp left turn onto a very narrow, very rocky and very steep path. I have now learnt this is the North Face MTB trail which has a "Red Difficult" rating. The grading description on the right doesn't really convey how tough sections of this course are. Take my word for it: it's tough, especially when mixing the single-track and very rocky paths with very steep climbs and descents mixed into a race environment. The cycle route didn't follow the entire North Face route, but most of it. For me the best parts were the forest road sections... I'm much more proficient on there sections.

As with the run, things were far from flat...

... and I found myself walking several sections as it was easier and considerably quicker than trying to cycle up the steep hills. In fact, other than the forest road sections, this is the only time I overtook someone instead of being overtaken, and a lot of people overtook me 🙂 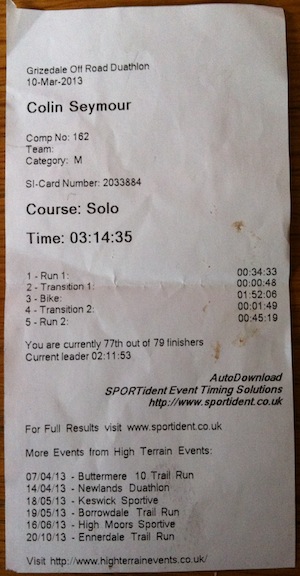 Coupled with the incredibly tough riding conditions we got to experience some pretty tough weather conditions too. Lots of strong winds and even snow flurries at the highest points of the ride contributed to making the race tough and I found myself shivering, despite being well wrapped up, in some of the windier sections.

At about 20km into the bike, I made the fatal mistake of thinking to myself: "You're doing well and you've not fallen off" and with that I instantly lost my grip with my right hand and took a drink from a very cold muddy puddle. The last 4kms were just as tough as the earlier parts, but now I had ice-cold wet gloves and the very real fear of losing my grip again and eating a bit more dirt. Thankfully that didn't happen and I managed to make it back to the transition area in a much slower than expected 1:52:06... I had expected to do the bike about 20-30 minutes quicker. My second transition was much slower at 1:49 as I couldn't get my helmet off as my fingers were so numb I couldn't feel the clip. Thankfully there were some people in the transition and I asked someone to undo my helmet for me.

All was not bad on the bike though... the views over Coniston Water were spectacular and incredibly beautiful with the the snow-covered peaks providing a lovely backdrop.

This second run was significantly more difficult than the first run. My legs were incredibly tired from the bike and my quads started cramping every time I made any attempt to run uphill. Running on the flat and downhill wasn't a problem, just the uphills. As I couldn't actually do much running, I ended up walking a fair amount of the first half of the second run. Normally I don't walk if I don't have to but I had no choice in the matter, my legs just wouldn't run without cramping. I wasn't alone though, almost everyone around me on the second run were experiencing the same difficulties. Naturally my second run time was significantly slower and I finished it in 45:19 giving me an overall time of 3:14:35. I didn't have a goal time, but I had originally thought I'd finish in less than 3 hours. I readjusted my expectations part way through the cycle and decided on trying to get in under 3:15 which I managed to do, just.

According to the official results, I finished in 86th place out of 157 finishers which isn't too bad.

All in all, a great day out but definitely not an event I'll be doing on my own again... someone else can do the bike leg next time.

I'd also like to say a great big huge thank-you to my mother-in-law for spending Mother's Day out in the cold watching me, my father-in-law for keeping my fans sane during the event and my wife for playing taxi after the event.