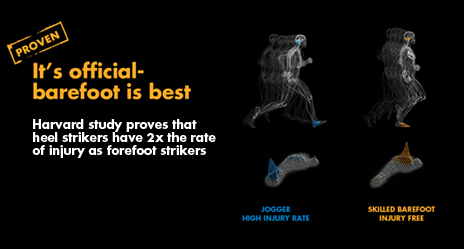 Yes, ladies and gentlemen, it is now official, barefoot is best. Well almost... if we do a bit of liberal interpretation 😉 . To quote Vivobarefoot's article (I've changed the link to point directly to the paper)...

Harvard Professor Daniel Lieberman has released his latest ground breaking research: "Foot Strike and Injury Rates in Endurance Runners: a retrospective study" which shows runners with a rearfoot strike have almost twice the rate of injury than those who forefoot strike, a characteristic found in skilled barefoot runners.
— IT’S OFFICIAL BAREFOOT IS BEST

Unfortunately, the paper is locked away behind a form that makes you buy it in order to read it, so I've not read the whole article yet, but the abstract gives us a good idea...

The sample size isn't very big and it doesn't conclusively prove barefoot it better than shod running - barefoot isn't even mentioned - but if they can come to their conclusion from such a small sample, we can further extrapolate to say barefoot has got to be better as you will almost certainly land on your forefoot when running barefoot. It's hurts too much not to. 😀

Now to see if I can get my hands on that paper.