Last weekend Fetcheveryone released a new game - Fetchpoint - and I think I'm becoming a bit of a coin-collecting addict, and the game is only in "test mode". The official go-live is not until January.

"So what is Fetchpoint and how does it relate to running?" I hear you ask. Well, the whole concept of the game is you collect credits by running, walking, swimming, hopping, skipping and jumping or any other form of activity that can be deemed exercise and for which you can log an entry on Fetch and generate a route, either manually or via GPS.

As you run around your 'hood, you collect points and get docked points depending on which marker you run through (you technically only need to get within 80m of it). At this early state, these are the markers and their descriptions from the Game Guide: 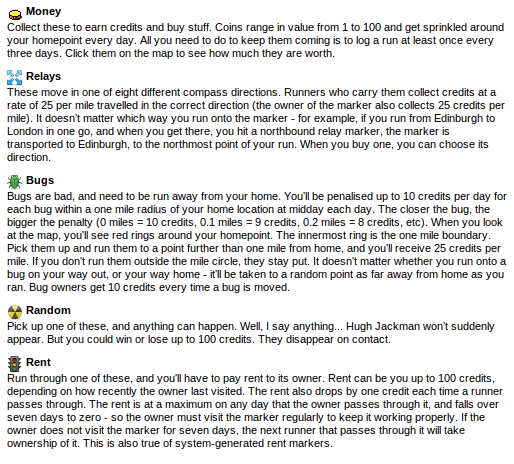 Apparently, more markers will be added as the game evolves.

In the 6 days since this was launched I've kind of neglected the other game I was playing (Conquercise) in favour of running a lot closer to home or work on some very weird and strange winding routes. I'm also not entirely sure how the scoring works as I seem to jump huge numbers each day. Today, for example, I jumped from about 7000 points to well over 11200. Yes, the 12.5km route was a windy coin-collecting session through some neighbourhoods I'd never been through and probably never will again (lets just say I'm glad it wasn't dark), but never expected to collect over 4000 credits.

I think Fetchpoint really appeals to my competitive nature as not only do I see my monthly and annual mileage total increase after each run, but I also see my credits rocketing too. Now if only I could convert those to cash 🙂 .

Oh yes, all this coin collecting has put the Super Mario Brothers game music and sound effects in my head during several runs now, and I regularly get the urge to jump at random points in my run. Have a listen for yourself and if you go out coin-collecting, I'm sure it'll pop into your head too.