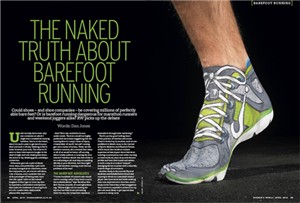 If you're a regular reader of Runner's World in the UK, you'll probably have noticed an article in last month's (April - why do magazines come out a month earlier than they're dated?) edition titled "The Naked Truth About Barefoot Running" in which I've been quoted. Whilst it's great to see barefoot running getting an article in Runner's World, I can't say I'm too impressed with the overall slant of the article nor some of the points and quotes made.

I'm a bit late publishing this post as I've been waiting patiently for permission to reproduce the article (I've made a PDF copy) to accompany this post. Sadly, my request has been completely ignored so you'll have to do with the pictures someone else has kindly put up on Flickr (these may disappear).

The article starts off by giving you an idea of exactly how open the author is to the concept of barefoot running - he's not. He'd definitely prefer shelling out for "expensive, rubberised contraptions that make the business of running from A to B a comfortable, fashionable, pleasurable experience." Fair enough, everyone is entitled to their opinions, but unfortunately, this puts a negative bias on the article right at the very beginning and the bias continues through the whole article.

With the tone set, the author gives a relatively brief account of why barefoot running is seeing a lot more publicity recently with a nod to Born to Run, the Lieberman paper and several other studies dealing with the possible benefits of running barefoot. It's in this section that Barefoot Ken Bob Saxton and I, the only completely barefoot runners in the whole article, are quoted.

Then the article moves onto quoting Dr Reed Ferber of the Running Injury Clinic at the University of Calgary:

Surely this can't be true or accurate. I think Dr Ferber may have been seriously misquoted, quoted out of context or he's really anti-barefoot running. If it is true and these camps exist, then someone needs to be shot. Either the people running the camps who are trying to make a quick buck without actually thinking, or those who are attending these camps thinking they'll emerge injury free barefoot runners in two short days.

No matter how good a runner you are in shoes, you're can't expect to continue at the same rate when you kick off your shoes. Your feet will be weak and unconditioned after years of being shielded by the shoes you've been running in. You wouldn't take a fat couch potato and make him run the New York City Marathon, swim the MidMar Mile (the worlds largest open water race) or cycle the Tour de France without any training and adaptation - why would you do the equivalent with barefoot running? Thankfully the article does cover this angle later on with several excerpts from Lee Saxby, a barefoot running and POSE method coach, who emphasises that barefoot running requires a period of transition, and I couldn't agree more. On a side note, I missed an opportunity to meet Lee at the recent VivoBarefoot Evo (review coming soon) kick-off breakfast run in London due to commitments relating to the recent death of my daughter. Maybe I'll get the opportunity another day.

The article finishes off with the general summary that barefoot running should only really be used as a tool in your training toolbox, that it's not some magic miracle cure and that it shouldn't be a lifestyle choice. I agree mostly with this, but I certainly wouldn't suggest ruling it out as a "lifestyle choice". I think this is something everyone should assess for themselves. I've chosen this route, but it doesn't mean you have to. The only way you'll be able to tell if this is really something you want to do long term or if it'll have any effect in preventing your common running injuries is to actually get out there and do it consistently - take a whole season to give it a proper go as one or two runs a week on grass won't really give you a good idea. Of course, if barefoot running isn't for you, then by all means carry on running in shoes, but do make sure you bung in a couple of runs barefoot if you can - barefoot running on golf courses is glorious.

Oh yes, and I wouldn't waste my time with the strengthening exercise detailed on the last page. I don't think these will prepare you for the rigours of barefoot running. The only way you'll be able to strengthen you calves, feet and stabilising muscles for barefoot running is by running barefoot. The exercises listed are just not specific enough.

So in summary, I think the article is good in that is brings a bit of attention to barefoot running in a mainstream magazine and it may be just enough to persuade a couple more people to give it a go, but sadly it's a little biased against taking it up whole-hog. This isn't surprising considering most of the money made from Runner's World comes from advertising, in particular shoe advertising, so they won't want to be seen to shoot themselves in the foot.

Have a read of the article and make up your own mind.