I stumbled upon this interesting article from the New York Times which links to an analysis performed by Danish statisticians on the non-elite finishers of the Amsterdam, Athens, Berlin, Boston, Budapest, Chicago, Frankfurt, London, Madrid, Marine Corps (Washington), Paris and Warsaw marathons, between 2009 and 2014, and then determined which were the fastest nations by average finishing time.

This is interesting idea and the New York Times article opens with:

A new analysis of more than a million recreational marathon participants at major marathons around the world finds that the world’s swiftest amateur marathoners do not share the same nationalities as the world’s elite racers, many of whom come from East Africa. In terms of average pace for its runners, the United States sits near the bottom of the nations included, vastly trailing that marathon powerhouse, Iceland.

… and towards the end quotes one of the statisticians with …

"Many see Africa as the marathon continent, but they only dominate in the elite scene," says Jens Jakob Andersen, a runner and statistician in Haderslev, Denmark, and the lead researcher for the new analysis. "In recreational running, it is not a popular sport.""

… and by looking at the infographic and analysis, they're right: 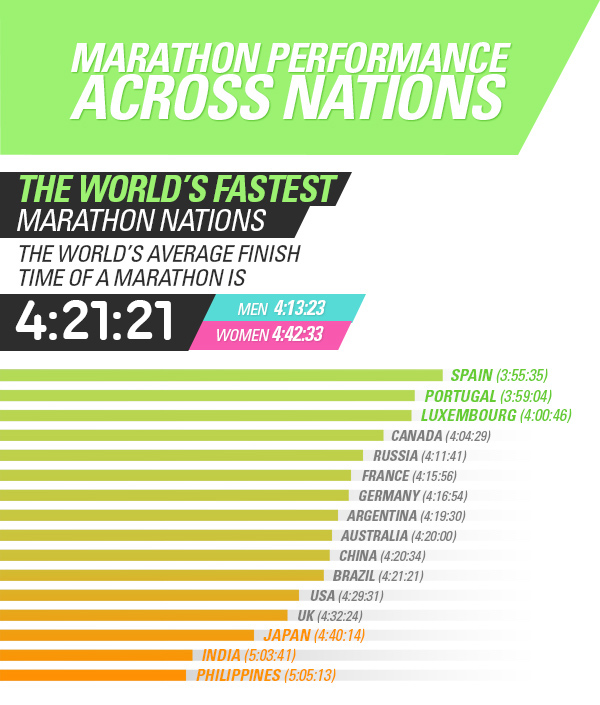 … however, as I see it, the data isn't really representative of the world as a whole and as such doesn't fully support the comments and conclusions made.

"So what's wrong with the analysis?" you may ask. Well, two things instantly pop to mind:

These two points dramatically cut down on the diversity of the results and limits entries from African, Asian and Asia-Pacific countries to those that are wealthy enough or who have been sponsored to travel to the countries of the races studied. To me these points also significantly water down and possibly invalidate the claims being made.

It's also not clear what they classify as an "elite" runner. I run sub-3 hours but don't consider myself elite… far from it. By London Marathon standards I don't even qualify for the championship start which is for the super-fast club runners. I doubt this will affect the results much, but it would have been nice to know this.

I'd love to see this analysis performed again using a number of races with similar sized fields from many more countries and then see how this compares to the elite performances. I suspect we'll see African and Asian countries ranking much higher than they do here.