If you've been following this blog for a while, you may have noticed I got a little potty mouthed recently and there's good reason for that: the Chester Marathon. My fastest and best executed marathon EVER at the ripe old age of 39!! I should have been running these times as a 20 year old, if I hadn't shipped my 🍑 across the world in the quest of , I mean a job, and taken a 10.5 year hiatus from running.

Thanks to my previous PB being below 2:45, I got the "Elite experience" for this race. This meant I got to keep my stuff and myself cosy and warm in a room with the other elites until 10 minutes before the start when we were escorted from the room to the front of the race. I'd already warmed up with a lap of the race track and some stretching so was quite warm when we headed out into the cold, which was perfect running temperature.

I went into the race wanting to set a PB by getting under 2:42 and maybe gun for a sub-2:40 if I had the legs and lungs once I knew I'd get the PB - I'd been training for a sub-2:40 so it was definitely on the cards if I played them right. I was feeling incredibly strong and fresh too so had to be very conscientious about my pacing.

I started off quite conservatively but a little on the faster-than-2:42 side of things, though some of this was due to a few downhill sections in the early stages. Once things flattened out and started to roll slightly up and down through the countryside, I settled into a comfortable pace around 3:50/km and tucked in behind a few guys running the same pace - I felt like Eliud Kipchoge as some parts were quite breezy so having a shield was very welcome.

This pacing and company allowed me to tick over the k's very comfortably and I passed through half way in 1:20:05, nearly a minute ahead of schedule 🙈. A quick bit of mental maths confirmed I was now on target for a sub-2:40 finish if I gave it a little push. I was also still feeling strong so I decided to go for it and pick up my pace to ~3:47/km to see if I could get that sub-2:40.

The second part of the race is definitely more undulating than the first so I really needed to dig in at times to keep the average pace at 3:47/km or quicker. Thankfully I was still feeling amazing and incredibly strong so kept pushing though I did slow a bit and passed 30k a little behind 2:40 pace in 1:54:13 and then 32k in ~2:01. This did however make things easy to calculate: at 4:00/km, I'd hit 42k at ~2:41 so for every k I ran quicker than 4:00, I'd have some time in the bank for the final 200m with the risk of a mad sprint. I then started repeating to myself as I ticked over the k's: "I've got 40mins to do 10k", "36min for 9k", "32min for 8k" and with each kilometer I saw my "bank time" growing until I got to "nearly 9min for 2k" and knew sub-2:40 was an almost dead cert. I didn't ease off though… I knew the finish was on the race course and anything can happen on grass. As it turned out the race also appears to have been ~200m longer so this extra bank time was needed.

I entered the race track and pulled out all the stops as I watched the clock tick over. In the end I finished quite comfortably under 2:40 and incredibly pleased with myself and my effort.

My final chip time of 2:39:46 smashed my previous PB by nearly 4 minutes with a 19s negative split to boot.

To say I'm chuffed to bits is an under-statement. I'm so happy and would love to get even quicker, though I fear time is now against me. That said, I'm happy to step over to the first old man's age group, V40, next year.

My only gripe with the Chester Marathon is it's not AIMS or IAAF Gold/Silver/Bronze Label certified, which means I can't use it for a Tokyo Marathon Run as One entry in 2020 in my quest to run all of the marathon majors, excluding the Olympics and World Champs (cos I'm really not that good). I'm becoming an old man and sub-2:45 is becoming more of a challenge, though this post and effort would suggest otherwise 😁. I'm running Boston and am considering Barcelona (as a training run with some winter sunshine) next year, so maybe I can get a sub-2:45 on one of those to "Run as One" at Tokyo 2020. 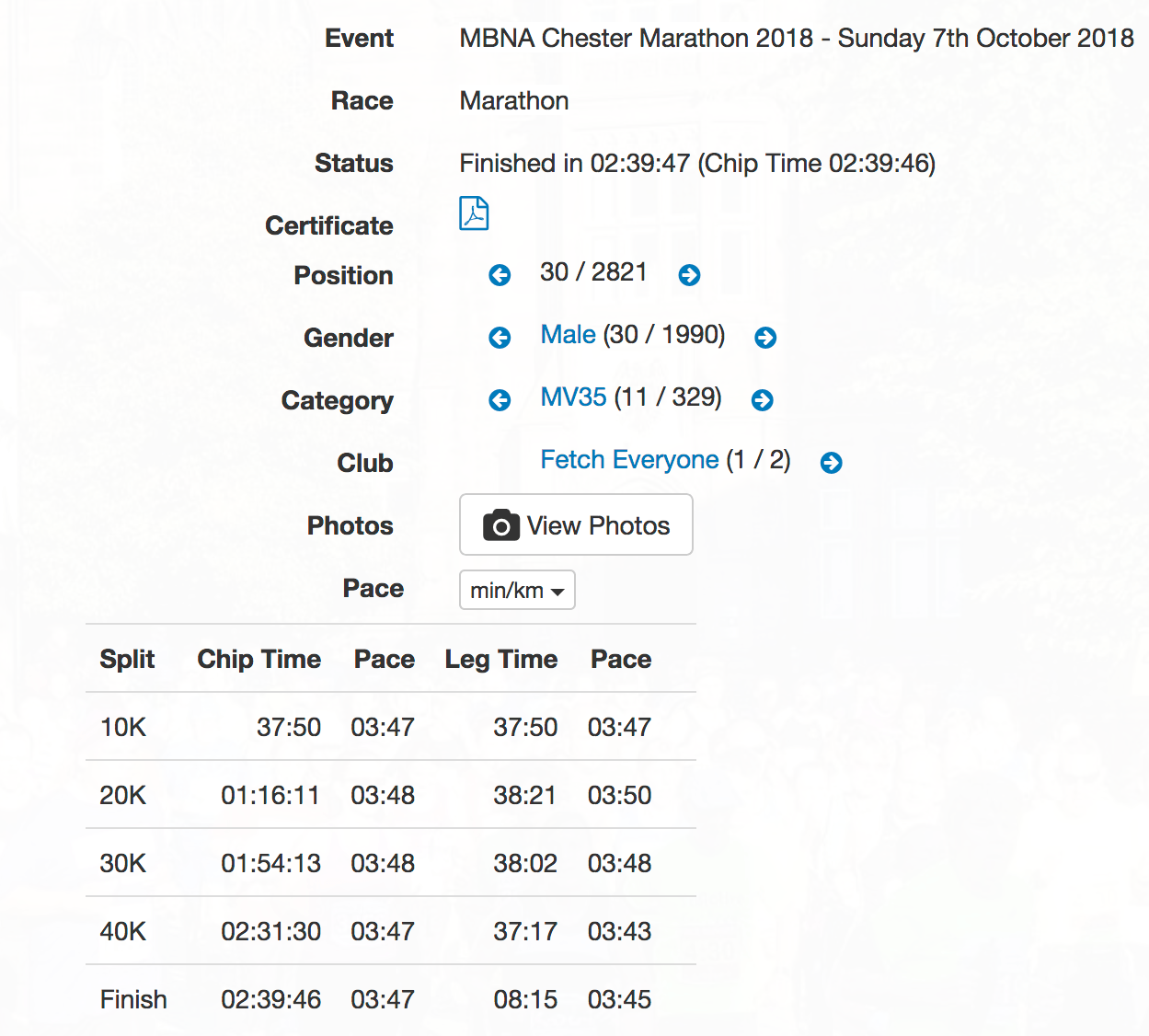 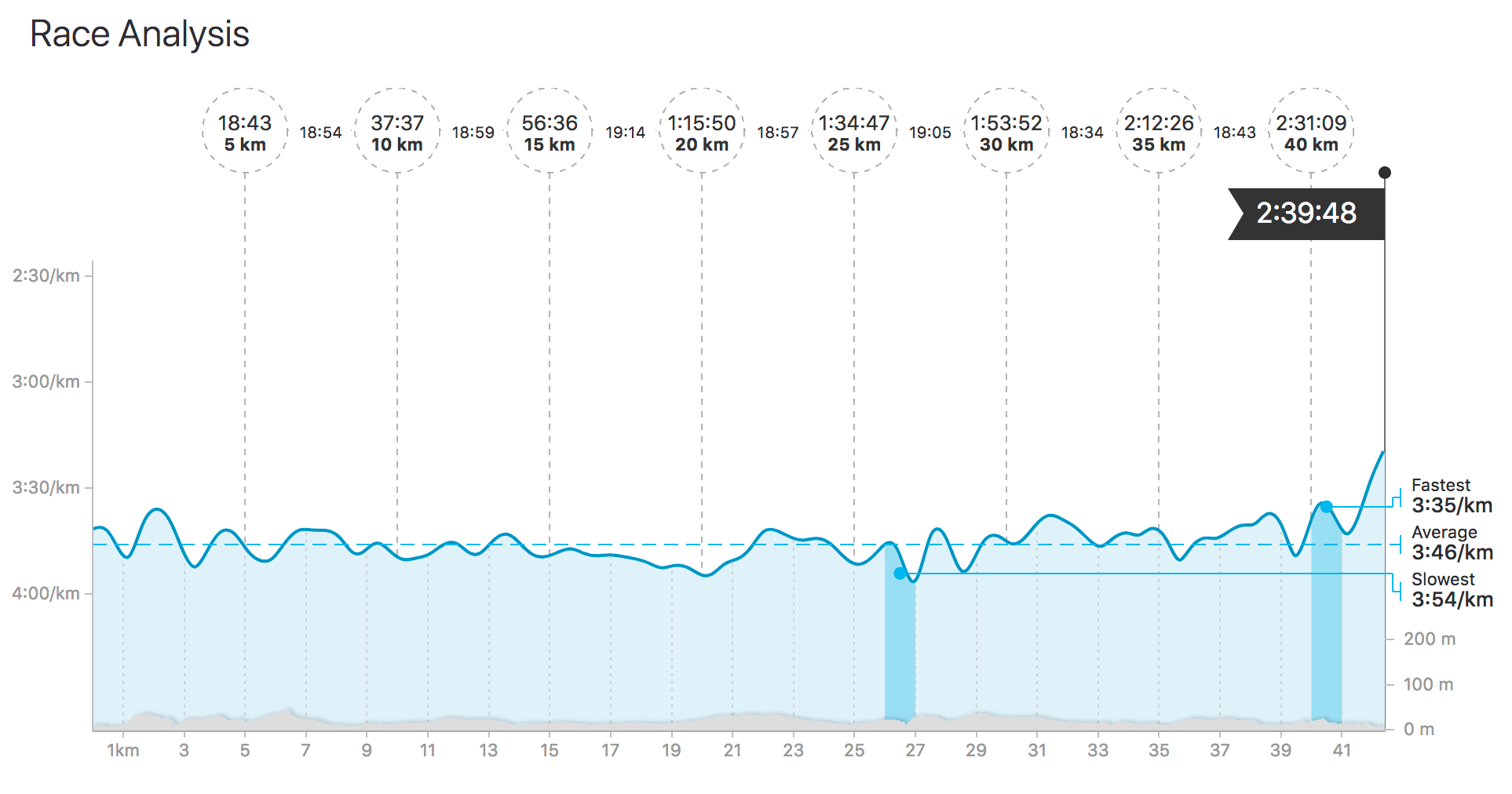