Late last year I planned out my racing schedule for the "big races" up to and including the Comrades Marathon and planned to run three marathons in my build up: Seville, London and Milton Keynes, with Seville and Milton Keynes being training runs to assess my progress and London being a race for a new PB. Seville was also to act as my Comrades qualifier as I didn't run an autumn marathon and needed to get one in early and was planing to use it to get my A seeding too. This Sunday I hit the roads and ran the Seville marathon. The build up was 💩, the race itself turned out to go a lot better than expected.

So about that build up… there wasn't really one 😄. My right achilles started to niggle around about mid-January and I laid off the running a bit and things went down. I ran the Farnborough half marathon in the freezing cold, did pretty well and confirmed my Comrades training was on track. Sadly my achilles decided otherwise and went into full on training-rejection mode the week after, relegating me to sitting on my butt, moping around the house. I hit the road for a few rides and tested things with an occasional run here and there but nothing really substantial. These rides and short runs weren't too bad at the time but often my achilles would swell and get creaky after them, many times edging on painful, thus sidelining me for a few more days.

Things started to turnaround, and quite dramatically, around about the 14th when I upped the number of achilles eccentric calf "raises" from about 120-150 a day to 300+ after reading:

While the 3 sets of 15 protocol works well for recreational athletes, competitive runners have to work harder to heal a non-insertional Achilles injury. In a recent study evaluating tendon resiliency with different strengthening protocols, researchers from Taiwan discovered that high-level athletes have no change in tendon resiliency unless they perform 4 sets of 80 repetitions. This research explains why elite athletes do not do as well with conventional eccentric protocols as recreational athletes. (Almost all studies on eccentric exercise use the 3 sets of 15 protocol.) I recommend the 4 sets of 80 repetitions protocol for runners averaging more than 50 miles per week.
— New Exercises For Fixing Achilles Injuries

I actually felt my achilles stop creaking around about the 250th rep on several occasions. I also rejoined the gym and visited a few times to do some swimming, full body kettlebell workouts and heavy eccentric calf "raises" on the leg press machine. This worked wonders and I flew to Seville confident that my achilles problems were pretty much gone, though I wasn't 100% sure… I wanted to run the race, but was prepared to drop out at the last minute or during the race if things got close to being too dangerous to complete.

So that's the 💩 part of things, now for the race itself which went better than expected.

Whilst still running the race, I took the wise decision last week to not race but run conservatively and enjoy the run as I knew there was no way I was going to be in prime shape for it off only 88.3km of very easy running in the last month. I also know I'd be less likely to pay attention to my achilles if I were racing hard.

So I went into the race with the following strategy: run comfortably and easily using only nose-breathing, to keep me in check, until half way and then see how I feel. If I've got the legs, and I've not pulled out and there are no signs of my achilles giving me any problems, I'm free to pick up the pace and see how I get on, but always be mindful of the achilles.

This strategy worked brilliantly and resulted in a fantastic race that I'm pretty chuffed with.

From the gun (which you could barely hear) I held back and concentrated on my achilles and my breathing, making sure neither were laboured nor uncomfortable. I held back my pride and the urge to go-and-blow and watched the tide (and the sub-3 hour pacer 😢) roll out past me and comfortably ticked over the kilometres. Ticked off 5k in 22:22, 10k in 44:04, 15k in 1:06:14 and suddenly realised I was running incredibly consistently without even trying - each 5k split was around 22 minutes each.

Wow!! This nose breathing malarky was really working! But hold on boy, you've got a long way still to go.

I contained my excitement and decided to see how the next 5k went without making any changes as I'd already said I'd not do anything stupid before halfway. I passed 20k in 1:28:21 - once again ~22 minutes for that 5k - and was feeling great and then started to think about what I could actually do in the end. I passed half way in 1:33:10 and the notion of a sub-3:05 and my first ever negative-split marathon entered my mind and I started to do the calculations. Whilst doing that - I calculate slowly when I'm running and concentrating on my breathing and achilles 😜 - I went through 25k in 1:50:15 which was just under 22 mins for that 5k and I still felt great. This, coupled with the fact the tide was turning pretty rapidly, was just the confidence boost I needed and I knew I was definitely on for a negative-split and quite possibly dipping under 3:05 too - I knew sub-3 was definitely off the cards so didn't even entertain that idea.

With a target in mind, I picked up my pace ever so slightly and progressively and aimed to ensure each of the remaining 5k chunks up to 40k were comfortably under 22 mins each with the idea I'd push the last two kilometres.

I'd done it!!! I'd just run a brilliantly and almost consistently paced race and my first ever negative split marathon - 1:33:10 and 1:31:13 - and I'd enjoyed every moment of it. Oh yes, and I took in all the sights too.

These are the official splits:

… and Strava shows the consistency to half way and the pick up of pace in the second half: 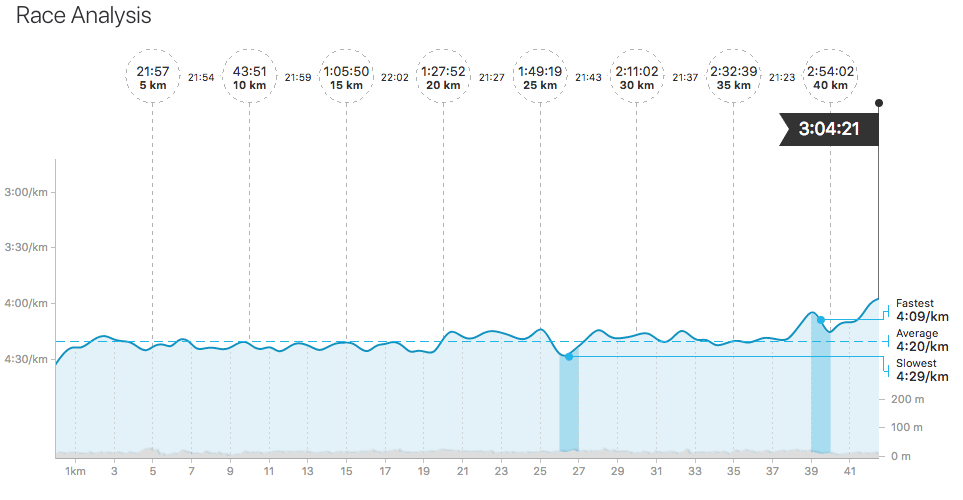 I'm so pleased with myself and very pleased to see that all those miles I put in late last year have paid off and helped me run a great race off very little training.

While my achilles didn't bother me during the race at all, it did go a bit creaky about four hours later, but this eased off around midday on Monday. I'll be back in the gym on Wednesday for more swimming and achilles work and can say I think things are turning around. I don't think I'll be getting that PB at London, but I do think I've got plenty time for a great Comrades build up, which is after all the primary purpose of the first half of this year's running. I'll have to use an autumn marathon for my next PB attempt and the last one before I tick over into the V40 category (when I'm allowed to wipe all PBs and start again, right? 😜).