Wow!! Look at that, 2019 already 😱 and I've just finished my first run of the year. It feels like it was only yesterday that I wrote up my 2017 in Summary post so I guess it's time to sum up what was definitely my best year of running, ever. I ran faster and further than I ever have and am really pleased with my efforts last year.

I quite like the format of last year's post so I'm going to do the same thing this year.

Strava has done some of the work for me in my 2018 Year in Sport video and finishes off with this summary, which includes all the cycling and running in the same stats: 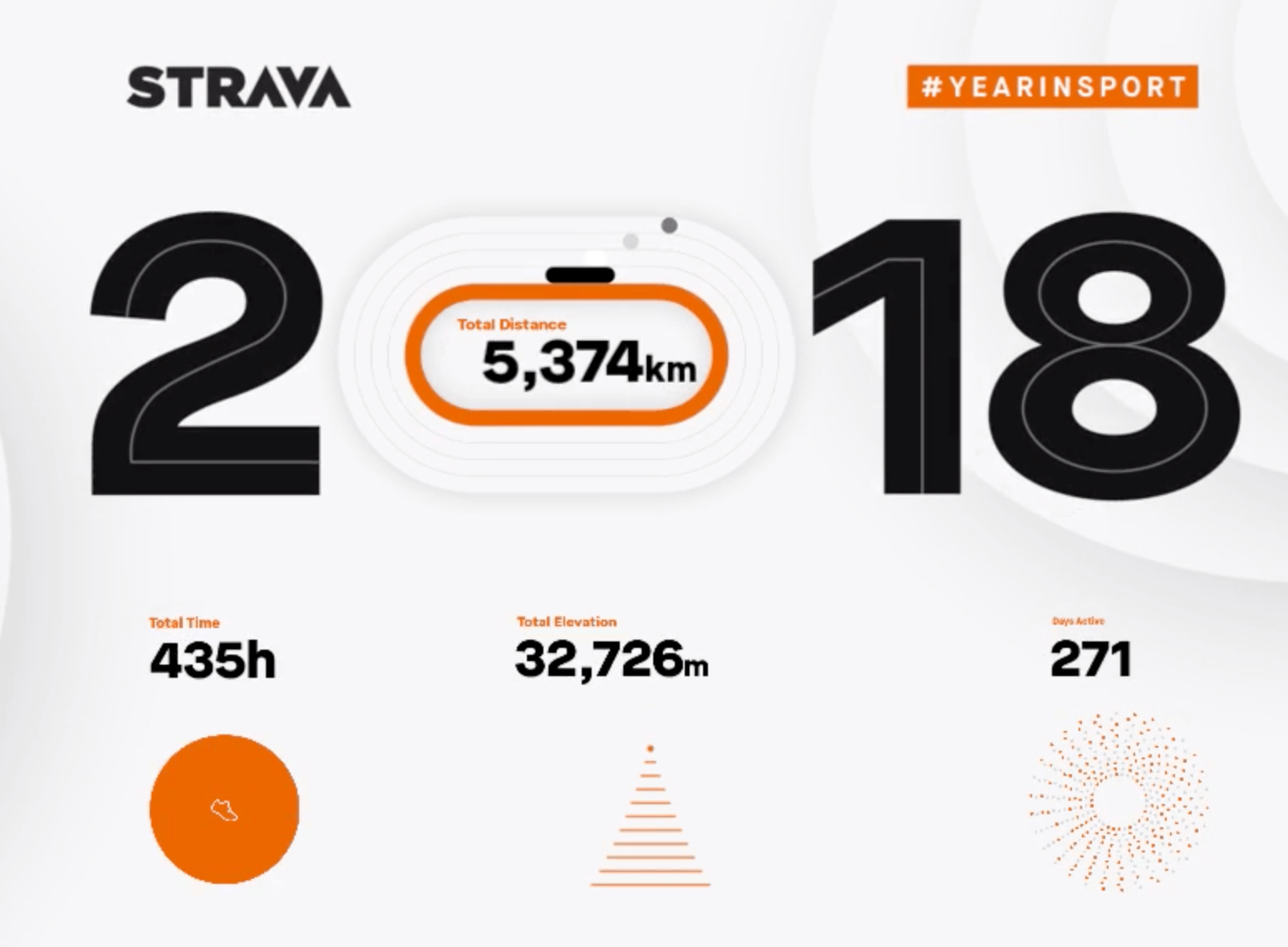 I'm quite disappointed by the Strava video and summary this year so once again, lets turn to Smashrun for a bit more info as last year was definitely my best year to date, even better than last year: 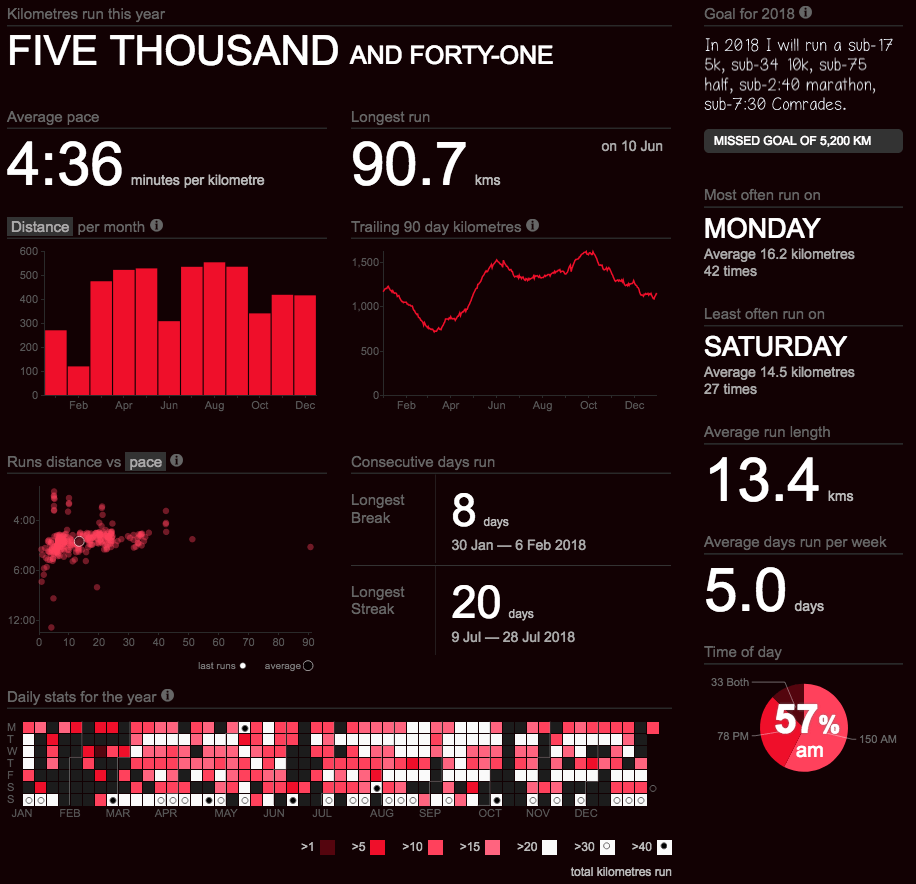 Interesting to note my average pace is 15s/km quicker than 2017.

A few other interesting stats:

As detailed in my plans for 2018 in my review of 2017, I experimented with a slightly different approach to my training last year by concentrating more on becoming a stronger runner than purely concentrating on mileage. I didn't implement or keep everything I'd planned, but did most.

As with previous years, I used a modified version of the 18 week 70-85 Miles Per Week training programme from the Advanced Marathoning book with MAF being the basis, though I wasn't quite as strict on keeping my HR within MAF on the medium-long and long runs. On these runs I often started with my HR within MAF but allowed the HR creep that comes as I tired and went on feel for the last part of these runs. I sometimes did the entire run by feel which ended up with an average HR just above MAF anyway and is probably closer to the real break point for me between purely cardio and edging into anaerobic. I also limited my long runs to 2h30m, though did exceed this a few times, but not by much or by plan.

As Comrades last year was a downhill run and known to be brutal on the legs, I introduced twice-weekly strength training sessions in which I concentrated on hip-hinge movements like deadlifts and kettlebell swings, weighted plyometrics and calf drops. I also threw in the odd quick plyometrics session at the end of an easy run. This change definitely paid off as my stride became noticeably longer and I felt lighter on my feet with way more spring. The calf drops have also proven to be vital at keeping the achilles pain I experienced at the end of last year and beginning of this year at bay and my ankles felt stronger too.

In the end the general break down of each week was:

I didn't think I did much in the way of racing this year, but on reflection, I actually raced more than I did last year. I ran four marathons (two of which were negative split races), three half marathons, three 10k's, two ultras, and eight parkruns.

This season's bests are as follows:

I move into the V40 category early this year so should find myself at the pointy end of my age category and if my performances from last year are anything to go by, may even find a few age category prizes coming my way 😁.

This hasn't changed much and as stated in previous years…

That said I did introduce one change: intermittant fasting on most of my recovery days - Mondays and Thursdays. I did this to encourage more fat adaptation, and also to see if I could gain some of the benefits that are meant to come with intermittent fasting…

It reduces inflammation and oxidative stress, leads to increased numbers and quality of mitochondria, and increases autophagy, the cellular self-cleansing process.

— The Sweet Spot for Intermittent Fasting

I'd been hearing more and more about intermittent fasting on the podcasts I listen to so though I'd give it a go as the benefits sound great.

I didn't do any blood tests or anything to determine if the fasting was doing what the science seems to suggest but I think it helped with my recovery and I definitely noticed an increase in mental clarity on those mornings. I've also found it much easier to skip a meal without even realising it.

I haven't finished planning out 2019 yet. The only real thing on my calendar at the moment is the Boston marathon as my first A race of the year. I'll probably do the Round Reading 50k again too. One thing I definitely plan on doing is seeing if I can get selected for the England Age Group Masters team in the V40 category for the 10k and half-marathon. The marathon would be nice too, but I missed registering before Chester last year and can't run Brighton this year so maybe I'll go for the marathon next year 😉.

As for training, I'm going to keep most of the changes I introduced last year with a few tweaks: